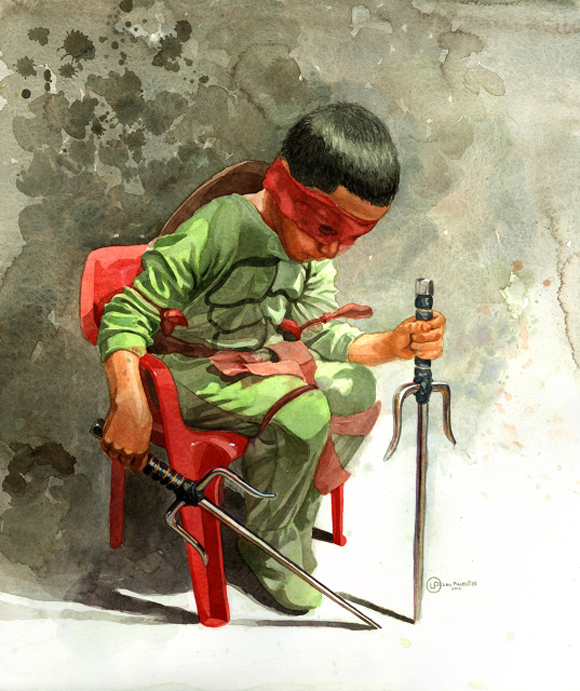 We were floored with his contribution to the 1st Annual DTA Dunny Show, and now  we can’t get enough of Lou Pimentel!

After returning from the show, we hit up Lou for a very fun interview, and he very graciously accepted and included images of his studio. 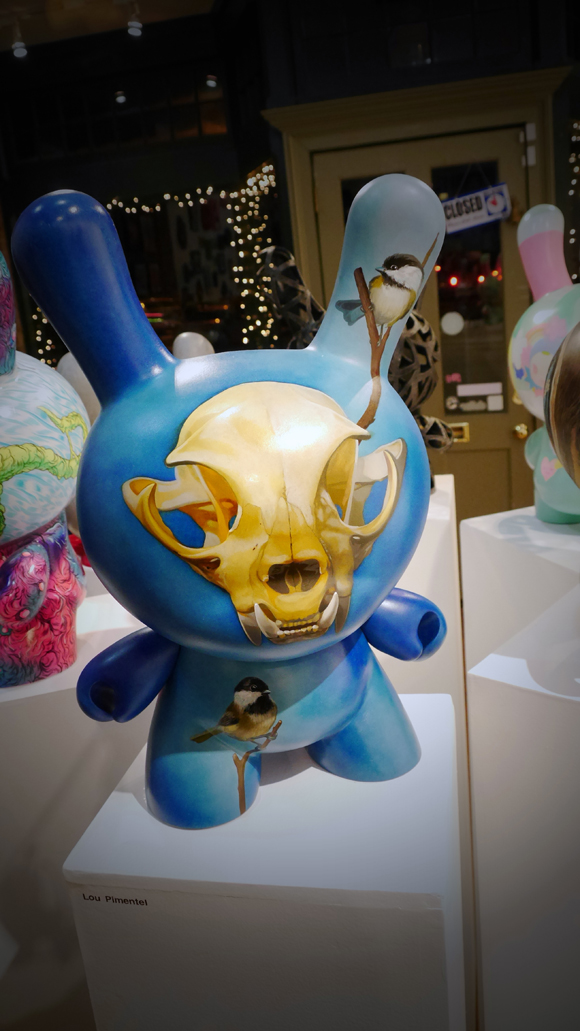 How about we start with the normal. Who is Lou Pimentel?

I am an artist based out of Brooklyn, NY, where I live with my beautiful wife, 4-year-old daughter, and 2-year-old son. I also have two Yorkies, Apple, and Pepper, and I enjoy fishing when I can find some free time.

Many know your vinyl work and haven’t seen your brilliant paint skills on canvas. Are you self-taught or did you attend art school?

I was self-taught for a while, but I wanted to get better at my craft, so I returned to school, and graduated from the School of Visual Arts, with a BA in Illustration in 2010.

Your work has a very broad spectrum, is this due to numerous influences?

My art is a projection of the things that I enjoy; family, nature, toys,graffiti, and sneakers just to name a few.Having numerous influences definitely keep my work fresh, and doesn’t allow me to get too comfortable doing one thing. I like to constantly push, and challenge myself to grow.

Does your daughter ever join you painting?

My daughter LOVES to paint with me. It’s really funny to see how much she’s picked up from me. The way she lays out her brushes, and supplies, is pretty close to how I set myself up, and that always cracks me up. She really likes watercolors, but has recently been painting plaster cast figures with acrylics. I think she is ready for some mini Munnys.

Let’s talk vinyl toys. How were you exposed to the wonderful world of vinyl toys, and what was the first you ever bought?

I was introduced to Kidrobot back in late 2004. One of my close friends mentioned that a new guy on the block was designing toys for a company called Kidrobot. I checked out the website, and I was immediately drawn to the scene. Turns out that the new guy on the block was Tristan Eaton,Dunny/Munny creator. The 1st toys I bought were the 3″ blind boxed Series  Two-Faced Dunnys by Sun-Min Kim

How did you decide that you wanted to do one of your own?

Well, when you customize other people’s platforms you can’t help but want to have your own 3D creation. I spoke with my good friends at MyPlasticHeart, and they asked me for some designs concepts,and we all agreed that Cranston Fellows Jr. was our guy. Initially we did a resin run,all hand embellished by me with oil paints, and the response was fantastic. Not many have hit the after market, so I assume that everyone is still fond of theirs. Since Cranston was so well received, we decided to create a newer version for the masses with our sofubi Junior.

Your “Winter” Dunny from the 1st annual DTA Dunny show was amazing. It is refreshing to see the Dunny form as just another canvas. What brought you to do that particular design?

Thank you, for the kind compliment. I really had a great time working on my Dunny for the DTA Dunny show. A few things inspired this piece. Earlier this year my daughter asked us for a bird feeder, which we have thoroughly been enjoying. A couple of weeks ago we had some chickadees stop by, and we were psyched. I’ve never seen chickadees in Brooklyn before. So, I have been on a chickadee kick lately. Being that winter symbolized death(the Skull), I liked the idea of the birds serving as reminders that better days are ahead.

Also, is that a cat skull? I have a full cat skeleton sitting behind my desk, and it looks familiar.

Good eye sir!! It is indeed a cat skull, a bob cat to be exact. I have four skulls, an opossum, a skunk, a fox, and a bobcat; my favorite of the bunch.

Describe a typical day in the life of Lou?

I get up at 7 AM pretty much 7 days a week. Mon-Fri, I get my daughter ready for Pre-K, and drop her off for a few hours. I come home, and hang out with my son while my wife gets ready for work.When my daughter gets home from school, we play games, or do crafts. Sometimes,they play nice together, and let me sneak in some work. When my wife gets home in the evening, we have dinner, and put the kids to bed shortly after. I then spend some time with my wife,and then I jump into my 2nd job, Dad the Artist.

Someone told me you are an avid record collector.This still true? I know the vinyl record scene is booming. United Record Plant just stopped taking on any new orders until their second plant is built.

HA! Where did you hear this??? I do love to collect old records, mostly stuff from the 70’s – 80’s, like The Cure, Journey, Bread, Lionel Richie, Michael Jackson, and Depeche Mode just to name a few. MP3s just don’t do it for me. Something about the hissing, crackling, and popping of old vinyls put a huge smile on my face. Also, hunting for records is part of the fun. I hit up yard/garage sales in the hopes for scoring some new tunes for the collection.

Anything you want to add?

I would like to thank you, for your time, and interest in me, and my work. It had been a while since I last customized a toy, but after doing the DTA Dunny show, that side of me was rekindled. I am hoping to slowly become a more active member of the scene again. I’m also excited about the changes at Kidrobot. With Frank Kozik at the helm only good things can happen. Cheers!

Lou was also kind enough to show off his studio to us, and if you want to see more of Lou Pimentel, check out his site here. 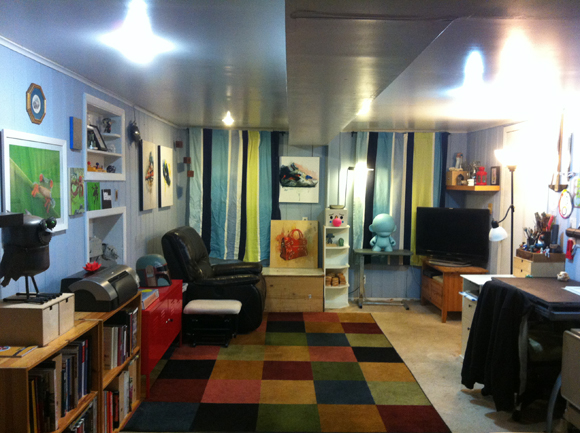 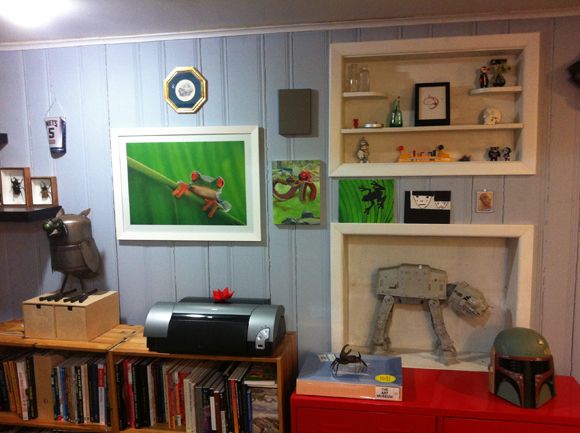 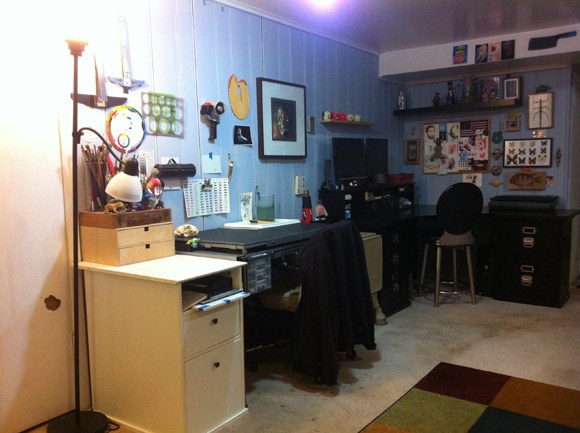 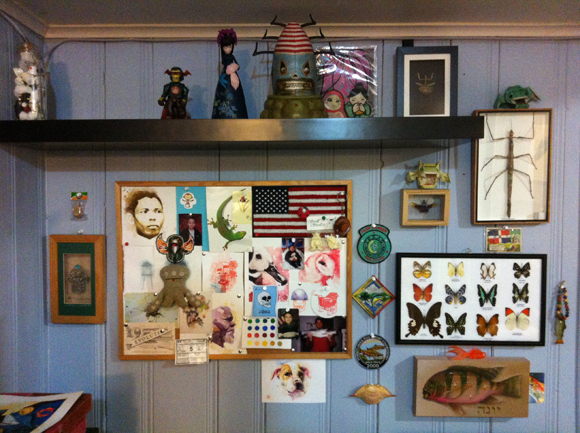 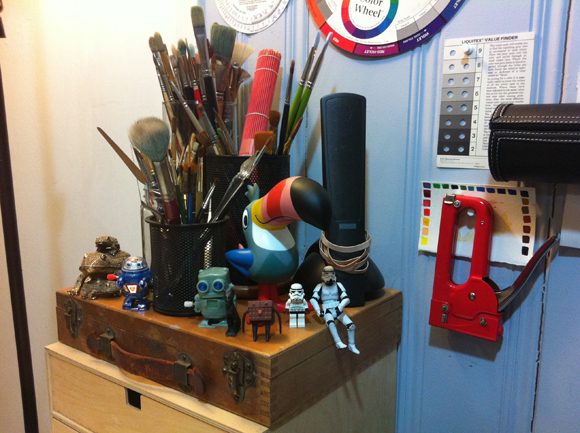 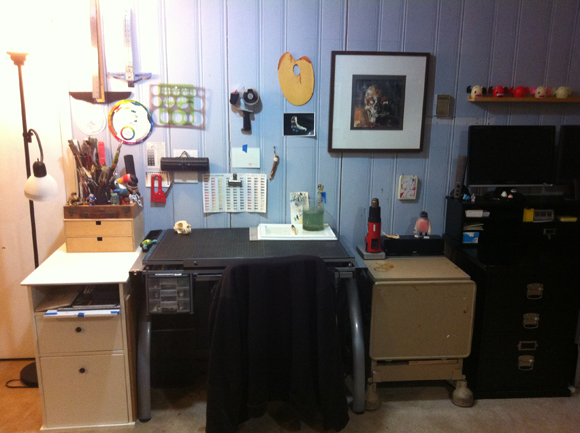 Next time, we will know to talk Star Wars too!