Releasing tomorrow on Kidrobot.. the new Joe Ledbetter Pelican’t figure has a story of its own..

1) What is this piece? Please tell us a few sentences about it: The Pelican’t is a medium sized vinyl figure depicting an airborne pelican “losing its lunch”. No, not because it’s sick, but because the poor pelican has leaks in its beak and the fish always seem to get away. I think we can all relate with getting close to an aspiration and watching it slip away just when we think it’s in our grasp.

2) What was your inspiration for this piece? While busy designing the upcoming “Outsiders” mini-figure series for Kidrobot, I was asked to choose a character from the series that would also work well as a stand alone medium-sized figure. I set aside the Pelican’t because I felt is was one of the strongest figures of that series for a number of reasons. More than just a character design, it tells a fun narrative of a of a pelican who “can’t” simply because the holes in it’s beak allow its meals to escape. I also felt that the way the Pelican’t is suspended in air mid-flight, and using the splash of the escaping water as a base were really interesting and dynamic ideas. I can’t take all the credit though, my wife Giorgia was the one who came up with the initial design concept after she saw me struggling with a “Toucan’t” character (that eventually hit the cutting room floor). By the way, the idea for the Pelican’t name was sparked by watching the Robert Rodriguez movie “Once Upon A Time in Mexico” where the Johnny Depp character asks the Danny Trejo character “Are you a MexiCAN or a MexiCAN’T?”, Trejo proudly responds “I’m a MexiCAN.” I thought that was so cool I wanted to apply that play-on-words myself, so I wrote it down in my sketchbook and many years later developed the Pelican’t.

3) What is your favorite design element of the piece? The team at Kidrobot came up with the idea of using the clear blue vinyl for the water, which for me, really took the Pelican’t to the next level.

4)What is the Pelican’t favorite thing to do on a summer day?  I figure the Pelican’t isn’t doomed to starvation, all it has to do is catch a fish too big to slip out of the holes in its beak. I suppose catching some big fish on a summer’s day is on the top if its list.

5) Fun fact: When I was in 4th or 5th grade my brother and I were contestants on a kid’s “Pictionary” game show, which we won, and both of us received an air hockey table as the prize. I stuck with art, but I suppose we could have become pro air hockey competitors since we got so darn good at it.

6) Joe Ledbetter (aka: J.Led) is an artist, illustrator and toy designer based in Los Angeles, CA. His distinctive style is deeply influenced by classic animation, underground comics, skateboarding and 1980’s video games. Over the years, Ledbetter has created an incredible cast of creatures used to anthropomorphize the human condition. With crisp bold lines and a vibrant palette, he mixes irony, social criticism and mischief making his work universal and unmistakable.

He earned a degree in Sociology from Humboldt State University in 2001, and despite a limited amount of formal art training, began his career as a graphic artist in the apparel industry. Working his way up from underground art shows, he’s been at his craft full-time since 2004 holding solo art exhibitions in 9 different countries, collaborating with top brands (IKEA, Nike, Swatch, Sony Music, Kidrobot), exhibiting in museum shows (Andy Warhol Museum, MADRE Museum Italy, Bristol City Museum, Riverside Art Museum), sold work at Christie’s auction house in New York, and has been featured in The Los Angeles Times, Architectural Digest, People Magazine, Juxtapoz Magazine and Hi-Fructose Magazine. He is most known for his innovative and distinctive designer toys. 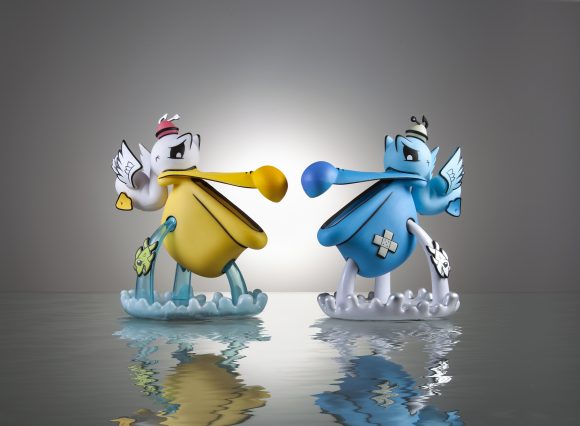