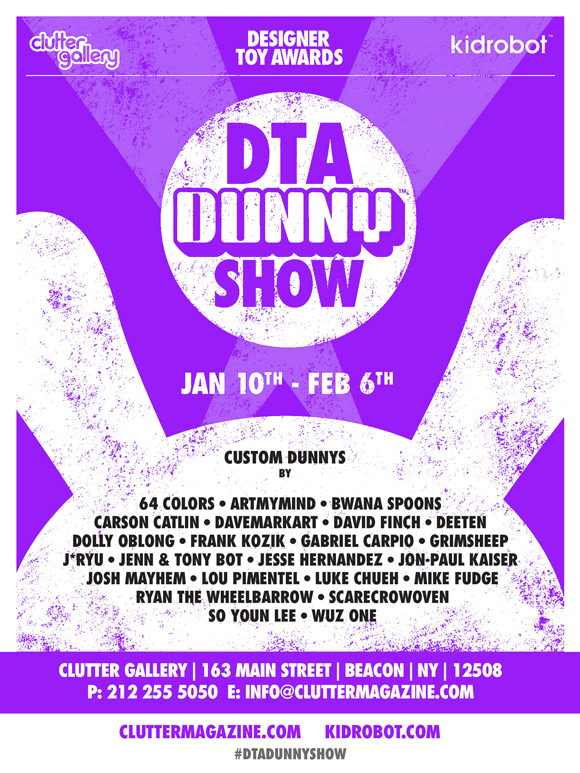 What began as a simple idea to allow artists to work live on stage at the 2014 New York Comic Con, has grown into something so much greater. On January 10th, The Clutter Gallery will open its doors to an incredible month long exhibit of customized 20” and 8” Dunnys, crafted by some of the industry’s most established and emerging artists. “As long time supporters of Clutter and The Designer Toy Awards, we immediately threw our support behind Clutter’s desire to have live Dunny customizing during this year’s NYCC,” said Steven Elmes, Kidrobot’s Director of Marketing. “When we saw the work coming out of that show, it was evident to all of us that we needed to make this a bigger event.”

“We’re thrilled with the way things have developed,” said Miranda O’Brien, co-founder and editor-in-chief of Clutter Magazine. “Clutter and the Designer Toy Awards have always been about garnering recognition for the art toy community as well as expanding the audience our scene reaches. We see this exhibition partnership with Kidrobot as a natural evolution of those things, as something that does nothing but help everyone making indie toys.”

There will be an opening reception on January 10th, from 6-9PM, and the exhibit will be on display until February 6th. The Clutter Gallery will have all pieces available for sale in their physical location and on their website. The Clutter Gallery sends out a newsletter to all users who are registered to the Gallery Preview List, which allows the recipients to view and purchase works before the exhibition opening. To register, please follow the link below: