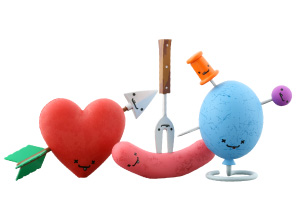 Travis Cain is a graphic designer and artist originally from Madison, WI. After running his own design studio for several years, he moved to New York City and attended the School of Visual Arts (SVA) where he earned an MFA in Design.

During his career, Cain has had the pleasure of working with clients as diverse as The Green Bay Packers, Sundance Channel, and Getty Images. His work has been honored by The One Club and featured in ID Magazine, Graphis, Communication Arts, PRINT and HOW. He has exhibited at the Cooper Hewitt Design Museum, SVA’s Art Director’s Club and other galleries across the United States.

Cain currently lives in New York City and works as an Art Director at a well-known cosmetics company. He loves his wife, spicy food, getting his hands dirty while screen-printing, riding his bike, and wrestling with his three sons.