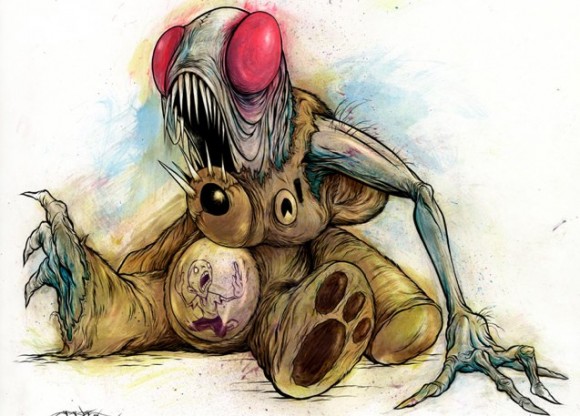 I like to believe that monsters are real. I always have. Actually, I KNOW monsters are real, they’re just really good at hiding. Which is why I’ve always imagined monsters reside right under our noses, often disguised or taking shelter inside every day items, big and small. That candle that is burning on your coffee table? There’s a small, scaly creature who loves sleeping in wax. The rattling inside a light bulb after it burns out? That’s not a broken filament, but rather a monster no bigger than the size of a fly. And those big semi trucks that are hauling what looks like 3 tons of dirt? Inside that dirt is a coffin where a recently deceased giant beast lays to rest. Those trucks are just hearses for monsters. And that enormous teddy bear that your older brother won you at a carnival when you were 7 years old? Well, there’s a reason why you think you see it move out of the corner of your eye when you are sleeping….

This belief of mine was the original inspiration behind a collection of paintings called “Letters From Digested Children”, which all featured children who were trapped inside the bellies of giant monsters, hoping to escape before they were digested. Out of the 20 paintings that were created for the series, “DigesTED” was by far my favorite, so much so that we created a giant 7-foot tall mixed media sculpture of it for the launch of the series a few years ago. 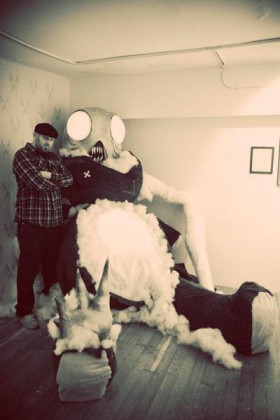 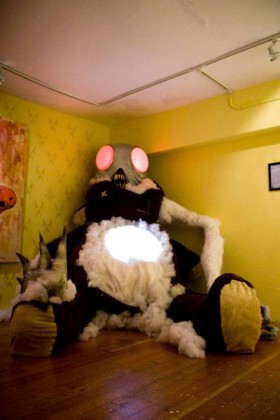 So I was beyond ecstatic when KidRobot and I discussed which toy we wanted to create for the KR BLACK series and we BOTH immediately had the idea to produce “DigesTED”. However, in my head, it was just a pipe dream. I had personally never before seen a vinyl toy (or any toy for that matter) as intricate and outright ridiculous as the thought of creating an all black, huge collectable vinyl toy based off of a splattery, rough, scratchy colorful painting, so I assumed that after taking some time to consider it, we would go in a different direction. But to my complete excitement, stopping, changing or simplifying my toy was never even a thought in the Kidrobot brain. We just kept moving along, getting me more excited with each little proof and idea we would share back and forth alongside the production.

I’ve wanted to scream and yell happily to everyone I saw that I was making a toy that was this cool since the moment I saw the first sculpt, but I wasn’t allowed to and it was driving me crazy! Now, I can finally be publicly stoked.

Which I am. Highly!

Maybe now, putting this “DigesTED” toy on your shelf will convince those little monsters that live inside all of your other toys on the shelf that we WANT to meet them, and maybe they’ll finally emerge to say hello.

But if not, trust me, they are still there. 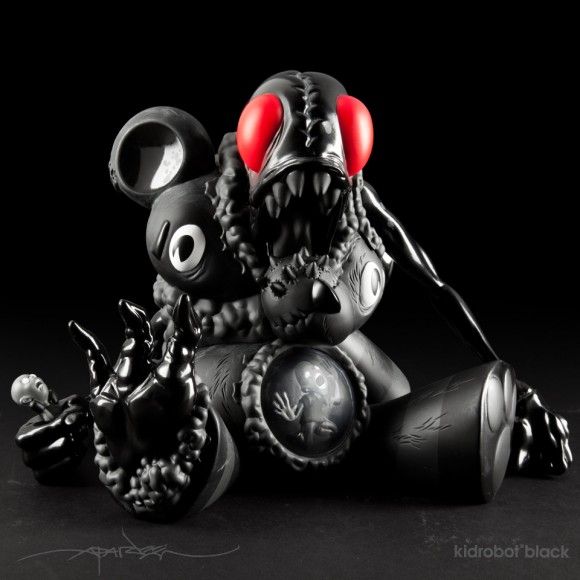 The images you create are “next level” monster. Why?

Growing up I played role playing games a ton, everything from traditional D&D and this game called G.UR.P.S. and then played Final Fantasy religiously. In those games, the higher the “level”, the more powerful the character, or monster, is. So there’s no way I would ever want to imagine or create a monster that is at level one. It’s gotta be next level!

How do you choose your pop culture references?

That’s a hard question to answer because it’s like asking someone who is possessed by a ghost what ghost they chose to possess them. I think it’s the opposite. I think the pop culture references pick ME, using whatever tactics they choose to in order to get my attention. Usually, I semi-watch movies and TV while I work, even if I don’t pay that much attention to it. A TV show like Finding Bigfoot or The Bachelor could be playing in the background completely void of my attention or knowledge about it, but eventually I will hear and see enough things out of the corner of my eye that catch my attention and make me say “whoa, that’s STUPID” and make me smile that I will start really paying attention and get obsessed immediately.

How do you feel about advertising and is there an era that you feel did it best?

I’m a big fan of subliminal advertising, like in that documentary Josie & The Pussycats. In the late 80’s I got blown away when a lot of that subliminal advertising got exposed, mainly in alcohol ads, where they would paint images like female mouths and sexy silhouettes into the ice cubes. And that whole Little Mermaid VHS debacle was pretty fun too.

Do you know who is your biggest fan/audience/buyer?

Yah, he’s a good friend of mine now, actually. His name is Robert Wadlow, he’s 8′ 11″ tall and he’s awesome. He died in 1940 but he was a huge supporter of my art before he died. I think my art is pretty popular with giants in general, which is something that is always really humbling to hear.

Outside of work, what else do you do? Day job? Do you have one?

I’m still juggling that whole cheese-farmer thing up in Point Reyes, California, but I think within the next year or two I can finally get out of there and focus more on my art, which is something I dream about as I run the exhaust regulator on the methane digester at the cheese farm.

Did you watch the Troll series growing up? If so, which one of the series was your favorite?

Yes, I definitely did, and out of the entire series of TWO MOVIES I liked part 2 the best.

Old: It’s a constant back and forth between “Creepshow” and “Night Of The Creeps”, or probably anything with “Creeps” in the title.

New: Cabin In The Woods.

Do you have a craziest experience at a Hospital?

Definitely! It’s one of my oldest memories but it was insane. I blacked out so I have no idea how I got there I just remember trying to open my eyes but I couldn’t. I could only hear. The sounds were muffled, and at the time I must have been so out of it because every voice sounded like nonsense. And then I felt wet, and cold. Like maybe I was getting operated on or something. Then I realized I was actually enveloped in some kind of muscley blanket. Then a light hit me. It was a small circle of light and then it got larger as I got closer to it. I heard the muffled voices get louder, and then my eyes opened and it was so overwhelming I started crying as someone grabbed my ass and raised me toward the light. Everything was great after that. That was the day that I met my mother and father.

Tragedy or comedy- Which do you operate off more?

I like laughing a ton, but I get nothing done when I’m laughing, because I’m too busy laughing. Whereas with tragedy, I get fueled by anger and fear and frustration, and work twice as hard in hopes of feeling better, so I’d say tragedy.

If one of our sales dept guys asked you to babysit his kids…what would that look like? ages 3 and 1.

Limited to 250 pieces. Releases March 28 at Kidrobot stores, kidrobot.com, and select retailers worldwide. Retails for $200.00 US. See the monster at Black.kidrobot.com for more details.