Skip to Main Content
Here’s another post by our friend Chris Holt aka The Toy Viking for our release of the new Futurama Capsule! Aren’t you luckyyou know who we are?? Make anyday better with Futurama Hypnotoad, Futurama Furry Little Nibbler, Futurama Mini Series Universe X!
Did you know today was Furturama Friday?  In case you didn’t we give you permission to call out from work so you can celebrate.  Even if you’re already at your job you can march right up to your boss, educate him about this joyous occasion, and proceed to take the rest of the day off.  You deserve it and so does Matt Groening, cause not only did he create Futurama, but he also created some little show called The Simpsons, which you may have heard of.  He’s a comedic cartoon genius who is making the rest of us look bad for not even having one iconic television show, let alone two.  I’ve got a great idea for one involving a family of buffalos the size of house cats, but that’s for another day.
The best way to celebrate anything is to surround yourself with items of remembrance and Kidrobot has plenty to help you adequately express your love for this animated sci-fi adventure. For you blind box lovers there’s the Universe X mini series that features a plethora of characters from the show.  We’ve amped up the paint jobs on your favorites from previous series, giving them  an entirely different look, kinda like a futuristic all star team. 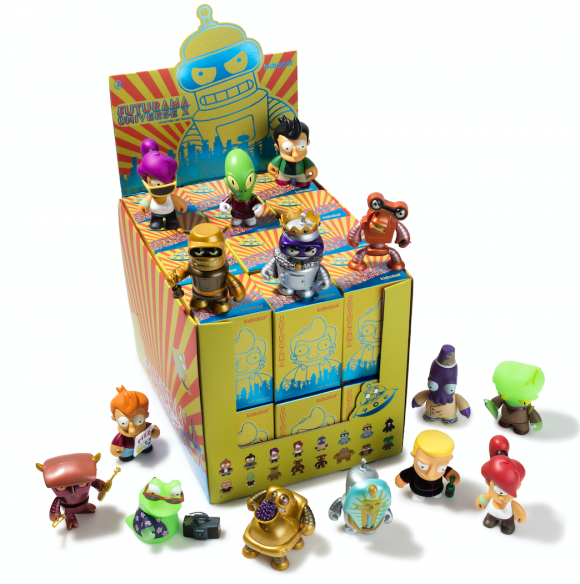 We could stop there but we won’t because we don’t believe in limits when it comes to vinyl toys, so we’ve also got a sweet new version of the Hypnotoad medium figure.  This guy has made me a little distrusting of amphibians, and I utterly refuse to look them in the eyes lest they try and control my mind.  He is sporting a new metallic color scheme and lenticular eyes that are seriously freaking me out.  I’m on to you, buddy and I’m not falling for…ALL HAIL HYPNOTOAD!!!!
Last but certainly not least is everyone’s favorite protector of Earth/adorable pet, Nibbler!  And he’s flocked, which is the most glorious thing that can ever happen to a toy.  Cute, fuzzy, and with a digestive track full off dark matter, he makes your dog’s ability to shake hands look sorta basic.  Step up your game, Rufus! 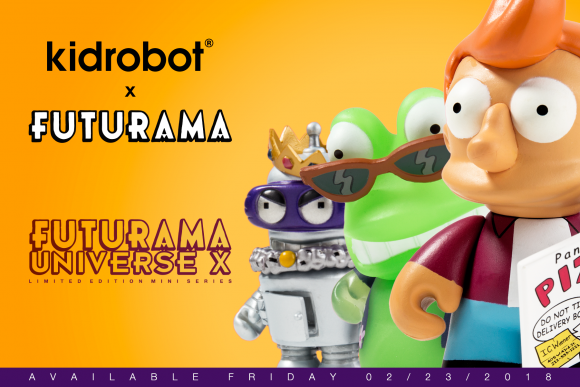 All you see before you is available now at www.kidrobot.com.