We know it’s not Fall but this 20″  Autumn Stag Dunny will bring something colorful to your Dunny collection for any season! Originally created for the Kidrobot x Designer Toy Awards DTA Mini Series for Five Points, the Autumn Stag by Gary Ham is now available for presale for 7 days only. Here to give a little extra info on this release is our good friend Chris Holt aka The Toy Viking.…Having debuted as part of Kidrobot’s Designer Toy Awards Dunny series, The Autumn Stag from Gary Ham has gotten a little bigger since you saw him last.   He’s gone from a modest 3 inches in height all the way to 20 inches, which is a decent growth spurt. I love elk in real life and if you’re not one of the lucky people who live some place where they are seen frequently, they are quite the sight to behold.  And if you get comfortable I’ll tell you about the time one of them nearly killed me when he thought I was looking at his lady friends.

Elk are creatures that seen to have come from another world to give deer something to aspire too. I had never seen one in person but while driving through Montana I knew my chances would be good. The entire day had nearly passed without a sighting and just an the sun was about to set on the day and my dreams a magical world revealed itself behind a hill. Everywhere I looked the landscape was dotted with these hooved behemoths; just hanging out and nibbling on vegetation.   I whipped a u turn right in the middle of a two lane highway and parked next to a fence on the side of the road at what seemed like the perfect vantage point. The herd was about a hundred yards away from us, which I figured was a safe distance and not at all encroaching on their dinner hour. I was baby kittens at the milk factory excited, rushing my wife to grab the binoculars and the camera in case they decide to leave. As soon as we get out of the car the sound forced every single one of them to turn and look at us.
EVERY.
SINGLE.
ONE.
Our presence put them on high alert, forcing thousands of coal black eyes to stare right through our souls like we had farted during a moment of silence at a funeral. We stood still and looked at them through our binoculars and after a few moments they all went about their business except for one. The biggest, baddest male, with antlers that begged to be quenched in human blood, kept mean mugging me. I know this because my wife said “Hey, the one with the antlers is totally mean mugging you” and when I looked she was absolutely right. Then as we locked eyes he started trotting toward us, probably not to invite us to hang out. I turned to tell my wife we should probably go but before I could formulate the words I hear the car door slam shut and lock. I had never heard of an elk car jacking anyone, so I didn’t understand the locking the door part, but safety first I guess. Thankfully I was smart enough to have not left the keys in the car. I start it up, floor it, and look back in the rearview mirror. That dude had broken out into a sprint and had made it to where we stood at the fence. I swear I could see his elk lips talking bad about my momma.
The Autumn Stag is a great beast, but is much friendlier than the one I encountered. If you needed proof it comes courtesy of the three 5 inch owl Dunnys that have made his branch-like antlers home. My cuteness raider just blew a fuse!!!! Preordering one of these is way easier than trying to to convince a herd to migrate to New Jersey and live in my backyard. All you have to do is visit www.kidrobot.com, input all your pertinent information, and in May of this year one of these Kidrobot exclusive versions will arrive at your door. Imagine how excited you’ll be when you come home from work and see the monster box sitting on your porch. That feeling alone is worth every penny. 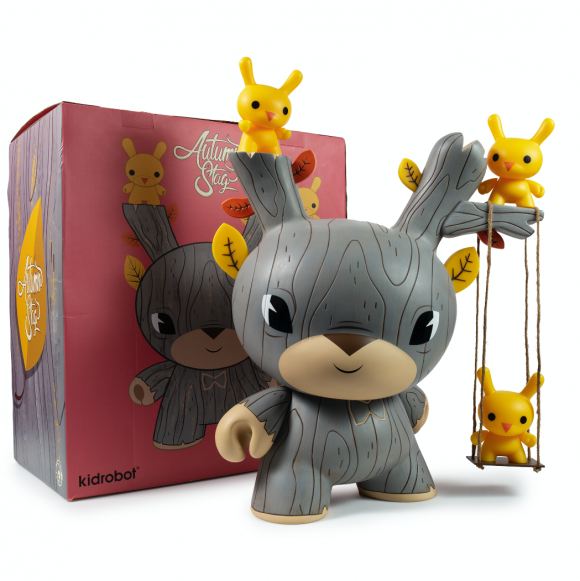