For some of us, it was seeing pieces in our favorite artist videos, fashion magazines etc that caught our eye for the first time. The same could be sad for the Luke Chueh’s Possessed piece. Tipping our hats to the vinyl Possessed piece, Kidrobot x Luke Chueh releases the “Wannabe” Dunny. Let’s see what our good friend Chris Holt aka The Toy Viking has to say about this release….

When someone decides to update the great modern art museums with stuff from actual modernity, the paintings of Luke Chueh will no doubt hold down a considerable amount of wall space.  His bear character effortlessly captures the struggles that we all face every day and presents it in such a way that makes the viewer feel like things may just be ok.  He gets through it, no matter what scenario he finds himself in, and it’s nice to think he’s a little bit wiser and a little bit stronger each time.  Kind of like a more cuddly Rasputin.

Kidrobot is continuing our very popular five inch Dunny series with Luke’s iconic character he has entitled “Wannabe.” From the looks of things he’s gonna wannabe calling a lawyer fairly soon.  Armed with a knife that will soon bear the moniker “exhibit a” and featuring an exterior that is flocked (oh so fuzzy) this is one figure you are not going to want to miss.

On a side note, this is the second five inch Dunny in a row who has been covered in blood that didn’t belong to him.  I’m not trying to get up in everyone’s business or anything, but I think the crew might need a little extra vacation time this year.  Just a few days to sit on a beach, sip a beverage of their choice, and let the calming sounds of the ocean’s waves soothe their troubles away.  I’m just trying to look out for you guys. 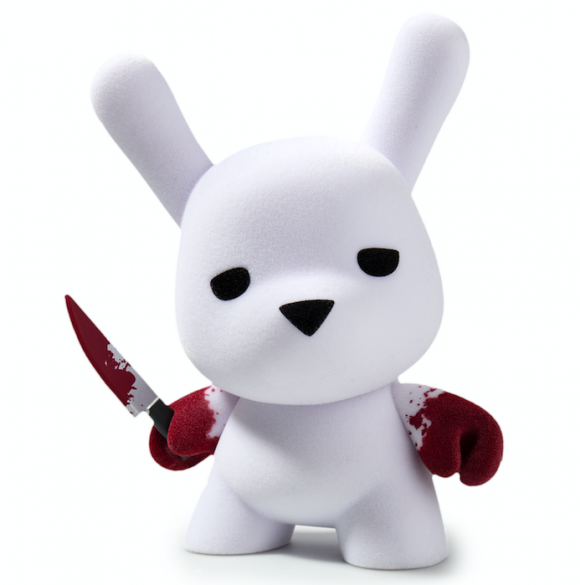 Available now at www.kidrobot.com.  Don’t be surprised if he needs you to come up with a solid alibi.  I’d start thinking of one now to get a jump on things.