#TBT making a day into being nostalgic and looking at our past mistakes before we go out for the weekend and make new ones. (Don’t do that.) KIDROBOT has made a few mistakes but this weeks Throwback Figure is NOT one of them. Kidrobot Presents A Throwback Thursday Post brought to you by the one, the only, our favorite, dununununununun Chris Holt aka The Toy Viking: Weird Comic Book Theater

Imagine:  You’re the world’s most awesome super hero and are loaded to the gills with every gadget and power you could ever need to fight crime.  Your existence is capable of making the world a better place but there’s just one slight issue keeping you from reaching your full potential:  You glow in the dark.  You shine like a glow stick of justice and it’s not a good scene.  Sneaking up on anyone at night is impossible as you look like there’s a rave following you around, so all of your efforts are spent during the day when the worst bad guys are still asleep. This inevitably leads to to an existential crisis in which you spend some time backpacking through Nepal before opening a laser tag business in Des Moines.

While glowing in the dark might be a hindrance in real life, it does make for awesome collectibles.  For instance this Kidrobot exclusive Batman from Mighty Jaxx and Jason Freeny.  Missing half your skin and muscle structure probably brings a host of other problems, but it sure does look cool.  And isn’t looking cool kind of a super power in its own right?  If it isn’t then how come there are so many videos on the internet of people looking downright foolish?  You just got scienced. 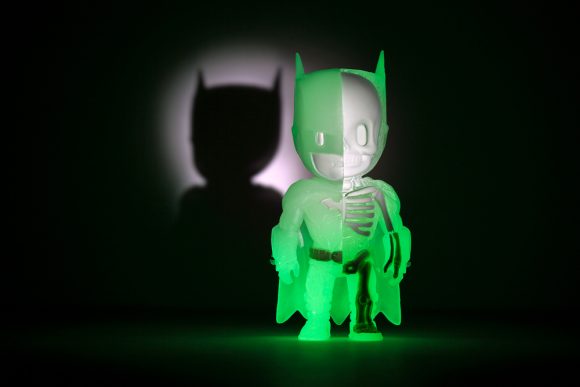 This not so dark knight and his way less glowy companion Wonder Woman are available now at www.kidrobot.com.