Ever wonder about the man behind the posts??? Lucky for us, we know this guy pretty well and were BIG fans! Read more about The Toy Viking right here, right now.

Hello, my name is Chris Holt and I’m the Senior Vice President of Worldwide Communications for Kidrobot which in layman’s terms means I create blog posts.  It sounded so much more interesting the first way I described it, didn’t it?  It’s all in the presentation my friends, which is why I try my best to present our products to you in a fun, off the wall manner that takes the artist’s vision and amplifies it to 11.  Yeah, I could have just made 10 louder, but that would be dumb.

A little bit about me: I enjoy designer toys, professional wrestling, petting cats, thrift stores, bad reality television, and meat products.  They’re telling me you don’t have the ability to swipe right on this thing, but I know you want to.  You may also know me from my other endeavor www.thetoyviking.com, which would easily have been Abraham Lincoln’s favorite website had he been more interested in toys and less interested in bad theater.

My first ever Kidrobot toy was a Dunny from the Tattoo Series, but my favorite current one is the Jason Freeny Anatomical Dunny you see me lovingly holding in the picture.  That thing is a wonder of modern science and I can’t stop staring at it.  Seriously, I’m late to work every day because of it.  But I’ve been hooked since the first one and I’m still just as giddy every time something new is released.  That is verifiably the first time I’ve ever used the word “giddy” in a sentence.  I stand by that sentiment though, because I love toys that much. 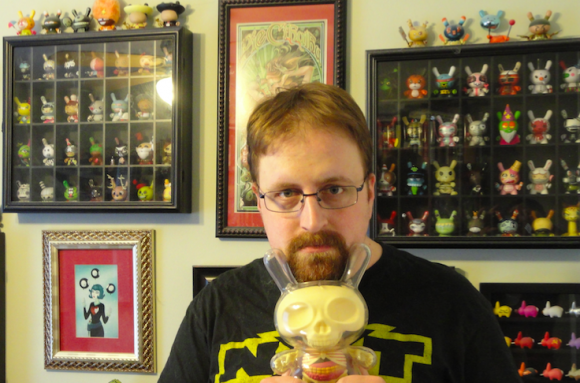