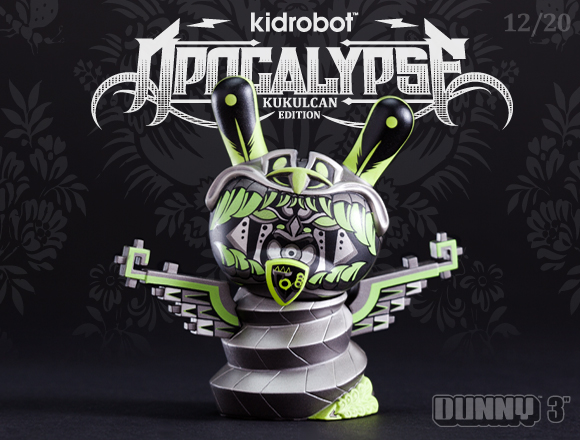 It has been said Kukulcan can make the earth shake, that he can predict storms, that he is a messenger between the Kings and the Gods. It has been prophesized by the Mayans that in 2012, as the 5th world ends, he will return to walk the Earth, just in time to watch it burn.
A color variation of Jesse Hernandez’s Kukulcan Dunny from the Apocalypse Dunny Series, the feathered serpent Mayan deity, Kukulcan, known later Quetzalcoatl to the Aztecs, inspires this grey, black, and green winged 3-inch Dunny. With a uniquely sculpted body and details, Kukulcan is an icon worth worshiping.  Dunny decends December 20, retailing for $14.95 US (£12 UK, €13.90 EU) at Kidrobot stores and kidrobot.com; only 2012 available worldwide—you better recognize.