Labbit dives into the Marvel Universe on a conquest of domination. Naturally attracted to the baddest butt-holes around, Labbit becomes one with the most wicked and sadistic supers. A mix of super-villians and antiheros, these Labbits are the ultimate smorkin’ machines. 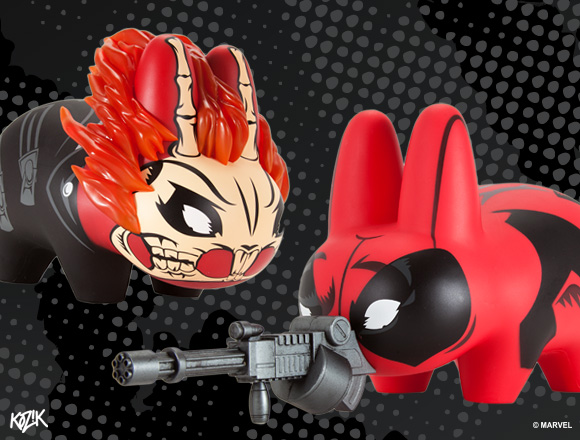 A motorcycle stuntman with a family curse, Johnny Blaze makes a deal with the devil that merges his soul with a demonic force. Transforming into a skeletal being with flaming head, he is known as Ghost Rider, battling demons and centuries old supernatural villians while trying to keep his own demonic half from taking control.

Up in flames! Riding the thin line between earth and hell, Labbit’s demonic half takes control. With flaming head, this 7-inch vinyl stunt rider is always smorkin’.

Deadpool (real name Wade Wilson) is a mercenary assassin, deeply scarred both physically and emotionally. He is the quintessential Marvel anti-hero – an assassin that only kills those he feels deserve to die.

Look out! The merc with a mouth, left for dead and too vengeful to die, will smork you. Wielding a samurai-sword-dagger-tommy-gatling-shot-gun weapon, this red and black 7-inch vinyl antihero is loaded with ammunition in the front and the behind.
Breaking free March 13, Deadpool Labbit retails for $49.99 at Kidrobot stores, kidrobot.com, and select retailers. 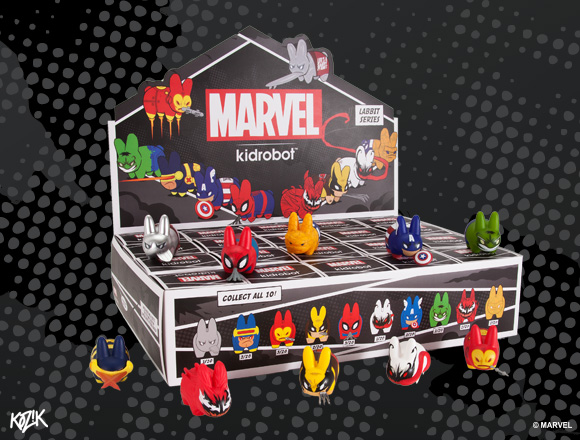