Loads of fans have written in to tell us how they collect toys. What’s your story?

My wife Alex and I are designers and studio furniture makers with a long-standing obsession with designer vinyl, which began with the purchase of a Series 2 Dunny blind box. (We got Cycle, in case you’re wondering.) Over the years our collection has become extensive, prompting us to create “The Hive.”

“The Hive” is a custom-made display, constructed of solid bamboo with lime green backs, built to showcase our current favorite pieces. We are dedicated to creating one of a kind work that speaks to a modern aesthetic, and we look to forms and textures in the natural world, such as old weathered wood or the spirals of a shell, for inspiration.

Our motivation, however, comes from an entirely different place. Reflecting on the works of great designers, architects, and sculptors gets us really fired up about creating and once we have a concept, we go into the studio, working days, nights, and weekends, often skipping meals and not getting enough sleep.
– Ed W. 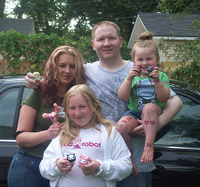 I’m on eBay one night and a cool FatCap catches my eye. I’m wowed by this little guy and I think my daughter will like it, too. So I buy a few, one for me, one for my older daughter, and one for her younger sister. They arrive and it’s over-we are hooked.

Now my family makes weekly trips to Lift in Royal Oak, Michigan. I am a FatCap fan, first and foremost. My wife loves Tokidoki, and so does my oldest daughter, but she’s into Dunny more than anything.

These toys have brought my family closer together and give us something to do every Sunday. Here are some pictures of us and a few of our toys. It’s neither the biggest collection, nor the best, but we love it nonetheless.
– The Endeans

An Escape From The Real World

I think it’s time for me to really speak out about my obsession with toys, art, and anything to do with Kidrobot. Growing up, none of my friends liked art or was interested in the art I did apart from a few people. As the years went on, fewer people would look at my artwork.

One day, this all changed. While searching the web, I came across Kidrobot. I was amazed just by the name so I clicked the link straight away. From then on, life was different. Then, I found out about the Kidrobot Forums, a really nice art community full of great people. When I logged on, I always felt at home.

As my collection grew, my art got better. And as my art got better, my confidence increased. So I want to say thanks, Kidrobot, for giving me an escape from the real world. Also, once all my friends saw the cool figures I had, they soon changed their minds and now they all collect Kidrobot as well!
– Brett C.

I Collect Kidrobot Toys … On The Other Side Of The World 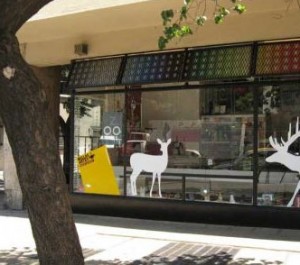 I live in Santiago, the capital city of Chile, all the way down in South America. Why on earth would someone living in such a place have the interest to collect such foreign pieces of art? There are only four Kidrobot stores worldwide, all of them in the United States. Down here, there’s only very few places in which you can buy these toys. Only one business imports them and sadly, they don’t bring as many toys as I’d like since they’re mainly a clothing company. They’re stuck with the older series of Dunnys and Labbits, and this greatly limits my potential collection, but I happily get what I can.

So you North Americans have it easy. You now know how it is to have the wrong hobby in the wrong place. You can simply walk your way to a store to get latest releases, attend events, and get your toys signed by the artists themselves. But not me. In order to get Frank Kozik (my favourite artist) to sign one of my Labbits (my favourite toys), I’d have to embark on an epic journey across the world.

So you ask why I collect them? Let’s just say, because I love them. That’s me, deep in the depths of this beautiful art on the wrong side of the world.
– Felipe F.M.

Typing in your credit card number on the Kidrobot website. The feeling of vinyl when you pick up a toy. Deciding whether to open the box or leave it as mint as possible. Carefully opening the toy after making your decision. Saving the plastic and foil wraps in the box. The dust that collects on top of your toys. Knowing that only 999, or 199, or 99 other people in the world own a toy you have. Choosing to buy a toy even when you’re broke. Your favorite artists’ signatures on some of your pieces. Your favorite pieces on display. Waiting in line for a toy signing. Waking at 7:55AM, West Coast time, for a Dunny release on kidrobot.com. Lurking, then posting, on the Kidrobot discussion board. The grief when you can’t go to a KR event in NY, MI, LA, SF, or overseas. Stacks of boxes and random arrangements of your toys … Damn!
– Marlon T.

Hello, fellow vinyl collectors! This post is about OCD and vinyl! Why OCD? ‘Cause some people obsess over how their vinyl is purchased, opened, stacked, packaged, repackaged, and all that jazz. Here is my personal little OCD with Vinyl. I’m all about 3-inch Dunnys. Why? Because they are a small canvas filled with big heart. I’m an avid collector (only missing Series1), and I make sure that each figure comes with a box, all accessories, foil, and clear packaging. Yeah, yeah, I know, we all do-but some don’t!

I’ve had great experiences getting Dunnys and have been fortunate enough to buy a few fresh boxes. Each box is opened totally randomly, but noted with tape as to which character came from which box. Is this OCD, or am I just a nut job? I don’t particularly think its a bad thing because it’s wild fun opening blind boxes.
– ClubberInMtl

I’ve only been collecting Dunnys for a short time but I already have a nice collection. When my sister first bought a few, I didn’t know what Dunnys were so I kind of thought they were weird. A couple weeks later, during Easter, I received two Ye Olde English Dunnys as gifts: Mimic and Triclops Rain. I fell in love immediately and wanted to buy my own, so I did, getting the MAD Dunny from Series 5. Then, weeks later, I get my first rare, a 123KLAN French Dunny.

Suddenly, I wanted more and more, to the point I was eventually spending all my money. I’ve got about 20 Dunnys total, so far, including a Series 4 Frank Kozik and Series 5 Junko Mizuno. I’m just a person hooked on Dunny Madness!
– Neil H.

How Kidrobot Got Me Engaged 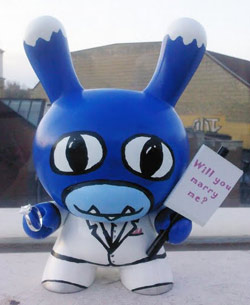 My fiancé Ben asked me to accompany him to an art museum and once we reached the second floor landing, there was only one table with a very prominent item on it: a customized Dunny. It was blue and white, wearing a white tuxedo with a pink bowtie and pocket silk, and was holding a sign and what looked like a ring. When I turned to Ben, he was on one knee, holding a ring and asked me to marry him. I thought, “That Dunny is for ME!” Of course, I said, “Yes!”