This isn’t the first time that we have had the pleasure of working with Alex Pardee. His first appearance was in the KIDROBOT black series where the Kidrobot x DigesTED medium figure. We are immediately drawn to his art by the way he is able to depict that creepy and yet imaginative part of the brain that thinks “that could never happen, I wouldn’t want it to anyway.” in colorful and creative ways. I mean, who doesn’t want to wear a shirt that will make pretty much anyone over the age of 50 look at you with disgust. He had a kick ass booth at San Diego Comic Con and now we will be honored to meet up with him again at the 3D Retro x Kidrobot City Cryptid Dunny Art Mini Series launch party. For now, we decided to ask him a few questions about himself and his piece in the upcoming City Cryptid Dunny Mini Series and here is what he had to say….

What’s one of the best things about being an artist?

Getting the opportunity to do interviews using Microsoft Word. I say that without irony.

What was your dream job when you were a kid?

I wanted to be both a bounty hunter and an archaeologist. Boba Fett was the closest thing I had to a role model when I was younger.

What is one of your favorite fictional characters?

Tell us about one of your recent dreams that you remember…

I had a dream the other night that a few enormous parade-sized balloons followed me down a crowded city street so I ducked into a bikram yoga studio to escape, which actually turned out to be a bikram yoga studio for overweight zombies that recited bad jokes as they drooled and tried eating me.

If you could live in any other time period/place where would It be and why?

The year 2525, because we won’t need our eyes or our fingers.

Your artist info on your website says lists you are inspired by both Skinner and Craola… how does it feel to be in the same monster mini-series as them?

Wait. Craola’s pretty cool, but who is Skinner?

What’s a word of advice you would give to others?

Give up. But not for a LONG time of trying really hard and then keep trying and then try harder. And then give up.

Teeth have become a visible recognizer of your work – where did this originate from?

I was legitimately born with too many teeth. I had 16 extra teeth extracted by the time I was in third grade, and all I got in exchange for them was JAZZ, the transformer that looked like a Porsche. Maybe that’s subconsciously where it was from. The dentist, I mean, not the Transformer.

This isn’t your first time working with KIDROBOT. How has your Art changed since the Kidrobot “DigesTED” piece?

Hmm, big eyes, exposed teeth, discolored skin, kinda silly. It actually hasn’t changed that much now that I think about it.

Was it challenging to translate your style onto the Dunny?

Not really. I studied the Voodoo religion for years so all I did was literally transfer my style from my hands into the Dunny with a crude Voodoo spell.

Tell us about Chupacabra from the City Cryptid Dunny Series: Does this character go by any other name? Why is he wearing a suit? What’s his day job?

He actually goes by the stage name of “Chupacadabra” .He’s a magician. Well, he at least goes to a lot of lengths to convince the world he is a magician. You see, he figured out early on that he can’t just constantly devour goats because he would get arrested. But if he pretends to be a magician, he can ask for volunteers to donate goats that he can magically make “disappear” without getting in trouble. Easy peezy.

What did Scott Tolleson say to convince you to do the Kidrobot x City Cryptid Dunny Series?

He said I had no choice.

What else are you currently working on? Can you give us a little information on some upcoming things you might be working on this year or next?

I’m working on Spell-checking this interview in Microsoft Word, the greatest piece of software in the universe. 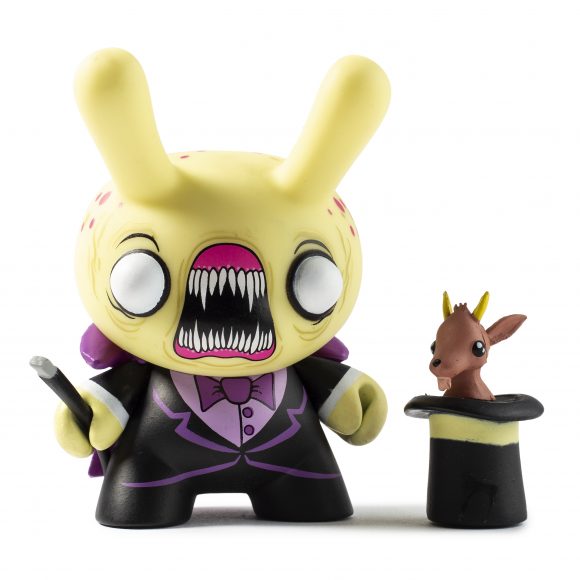