Well hey there! Just wanted to give you two thumbs up. 1.) one for visiting our blog and 2.) that you made it to another Friday! If no one ever tells you this…we are proud of you. Today is also a special day because we have released the Kidrobot x Crash Bandicoot Mini Series and here to say a little something extra about it is our favorite, Chris Holt aka The Toy Viking. Take it away Chris…

When I heard about Kidrobot releasing a collection of toys from the world of Crash Bandicoot it made me remember when his first game came out.  Then I felt old and decided to move on to other important matters, like if there was a sudden burp in the evolutionary story of human beings, what cool feature from an animal would you want to have?  At first I thought venomous snake fangs, but I’m kind of a germaphobe so they would go completely unused.  Then I thought in the spirit of Crash and other marsupials that a pouch could come in handy.  You could carry around your car keys or your important papers or use it as a hideaway for snacks.  In case you’re wondering I actually don’t have a lot of free time to think about these things, this is just what my brain does when people start talking to me.  That’s kind of like an evolutionary trait itself.

Crash Bandicoot has been entertaining gamers for years and now he and his cohorts are ready to do the same in your toy collection. You can bring them home as part of a blind boxed mini series or even as super soft plush figures.  The choices are as endless as the hours you’ve spent thwarting the evil Dr. Neo Cortex! 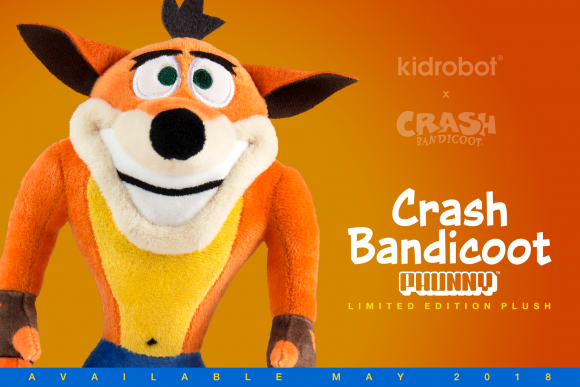 The entire collection is available today at www.kidrobot.com.