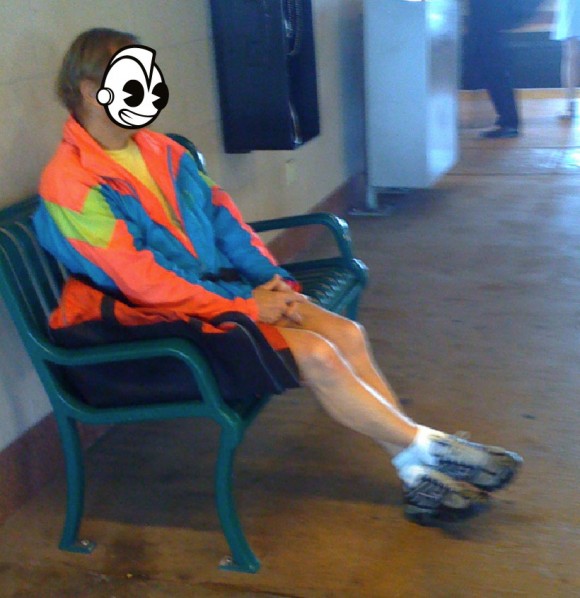 So I was at the Secaucus train station, waiting for the train, as usual. It was a nice sunny day and I was almost blinded. Not by the sun, though. I was nearly blinded by the man in the pic above.

Obviously, you can see why. His jacket was DAY GLOW COLOR BLOCKED.
Now were this a winsome, fashionable, YOUNG girl, it could have been cute… but we’re talking about a sixty-year-old man who was wearing short shorts. Who wears short shorts? NOT OLD MEN.

Of course, as a male fashionista who’s not as young as I would like myself to be, I can’t hate on this dude. I am sure he was feeling quite fab when he left the house.

This actually happens to me a lot, as a matter of fact. I leave my house in the AM, thinking I look the baddest; by the afternoon, I catch myself in the mirror, and have what I call an “HCC Moment.” That’s when I go, “HOLY CRAPPY CRAP!!!”

PJ is Kidrobot’s Apparel Design Director. In other words, he’s the man responsible for all our kick-ass clothing. It’s his unique vision and keen sense of style that sets Kidrobot apparel apart. Oh, and much like the eye of Sauron, PJ is all-seeing and all-knowing. If you’re fashionably challenged, he may feature you in his next column.