We know that when we ask Igor Ventura to make or be a part of something he is going to commit himself 100% and always have a real underlying story to what he creates. So when he became another featured artist in The Wild ones Mini Series, we knew not to just take his characters for face value. We asked him what each of his characters really meant and here is what he had to say…

When Kidrobot invited me to be at the Wild Ones Dunny series, I

theme, so they could tell a story together. One of the first ideas I

had was having 3 different animals representing the Military branches

– an eagle for the Air Force, a Lion for the Army and a Blowfish for

the Marines. But since I could only have one design with sculpting, I

thought it would be hard to make it work.

Another concept I wanted to explore was further developing an universe

I had previously created called Neandertown, and was trying to come up

with different characters that could fit into this wild and predatory

While I was brainstorming with my fellow Red Mutuca friend Luiz

Unreal, he suggested that I could try to get some inspiration from the

George Orwell book Animal Farm. I had already read the book when I was

a child, so I was familiar with the story and thought it would fit

perfectly with the theme for the series.

I made a lot of research, watched the animated film based on it, and

– A Berkshire boar named Napoleon, that leads the animals against the

humans, but later turns into the very thing he was against;

– A combination between a donkey named Benjamin, one of the oldest and

wisest animals on the farm, and a horse named Boxer, a loyal, hard

working and respectable cart-horse, although quite naive and gullible;

– A Sheep, showing limited understanding of the Animalism and the

political atmosphere of the farm; yet nonetheless blindly supporting

Napoleon’s ideals. Since they don’t have a name on the book, I named

it Aries, after the scientific name of sheep, Ovis Aries.

The only animals from the book that wear clothes are the Pigs, but I

gave myself some artistic freedom and decided to give the other

characters clothes as well, to help developing their personalities. I

also used phrases from the book printed on their backs, to better

represent what each of them was about. The color palette I used was 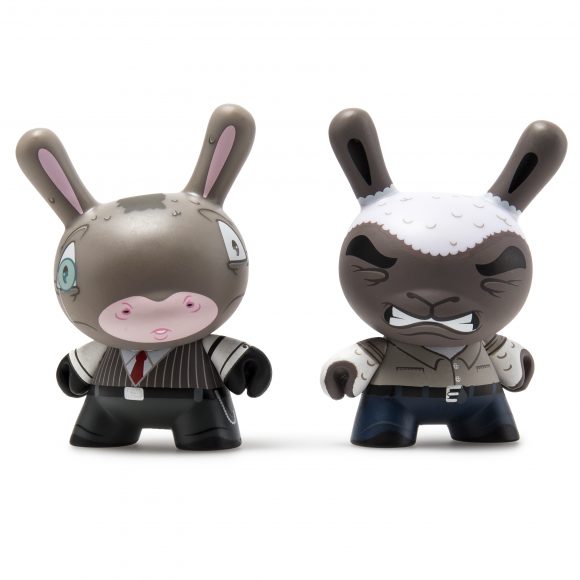 Crazy huh? Collect these characters and more on Friday, February 9th on www.kidrobot.com