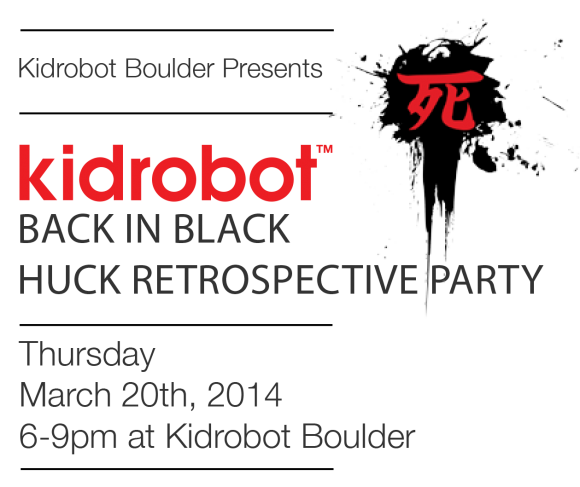 Kidrobot Boulder kicks off the release of Huck Gee’s Back in Black Skullhead DUNNY 8″ by celebrating Gee’s work past and present during a one night epic soiree: The Back in Black Huck Retrospective and Release Party will take place on Thursday March 20th from 6-9pm.

This Huck retrospective will feature a selection of notable Huck Gee pieces from the past and present.

The event will kick off with a brief talk on the history of Huck Gee’s work, followed by Huck trivia with Kidrobot prizes!

Those who purchase a Back in Black Huck Skullhead on Thursday March 20th AND who are present the night at the event, will be entered in a drawing to receive one signed Back in Black piece as a trade for the winner’s purchased unsigned piece. Runner up drawing prizes will follow.