We are so pleased to announce the release of the Kidrobot x Jean-Michel Basquiat Dunny Mini Series! To tell you his own opinion on this new Dunny set, is our friend Chris Holt aka The Toy Viking!

Jean Michel Basquiat’s artistic flame burned powerfully and quickly in his 27 years on Earth.  He was prolific in that time, amassing a body of work that went from mere post cards to some of the most sought after paintings by art collectors around the world.  Now he has joined the ranks of his former collaborator Andy Warhol and is having his work presented as a Dunny mini series from Kidrobot.  It’s a transformative way to appreciate his art to both long time enthusiasts and novices alike.

For me, Basquiat’s paintings are a glimpse into the chaos of living in a place like New York and being forced to grow up in less than ideal circumstances.  From homelessness to a mother who battled constantly with mental illness, his journey from boyhood to that of an adult in the shadows of a monolithic city is reflected in each line he painted.  There’s raw emotion spilled onto every canvas like blood that will bring something new to every person who views them.   His work is akin to a musical performance where each lyric is a verbal exorcism laid out before you on stage.

It got a little heavy there, but the great thing about the Dunny platform is that it takes an artists’s work and presents it in a way that is completely accessible for everyone.  You don’t have to search deep within your emotional framework to enjoy the pleasant aesthetics of each figure or the way the art enhances something you know so well. They will fit seemlessly into your collection while tricking you into thinking you’ve moved into a modern art museum.  Make sure your guests always exit through the gift shop. 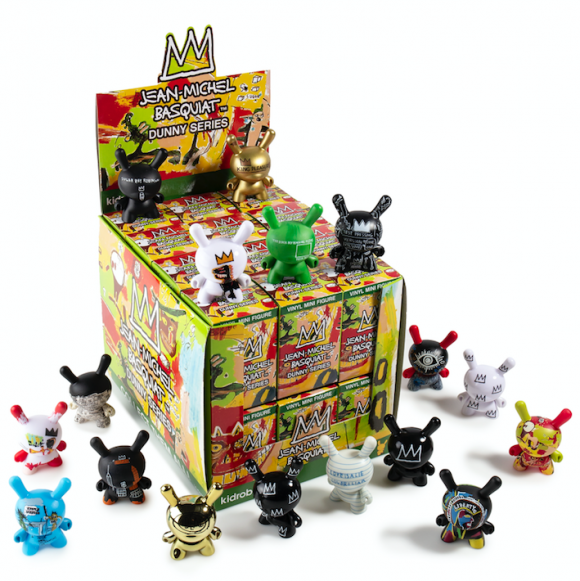 This blind boxed series features 18 different designs of neo-expressionist perfection and is available now at www.kidrobot.com.