Here is another blog from our good friend Chris Holt aka The Toy Viking on the release of the new Nickelodeon Mini Series!

Kidrobot is hitting me right in the feels with these Nickelodeon figures from back in the day.  For those of you that missed it, the 90’s were a great time to be alive.  The music was awesome and the internet just started making its way into people’s homes.  I remember when I first got online by utilizing one of those cds they used to mail you every week from the different providers.  It took forever to get connected and listening to that horrible screeching noise was almost enough to make it not worth it.  But then something magical happened: an entire world of information was there for the taking.  Not quite understanding bookmarks or search engines I would print out my favorite things I found and put them in a binder.  Most of the time it involved a funny picture or facts that I found interesting.  I amassed quite the collection before my parents taught me a very important lesson about the cost of printer ink.  I’m still paying that bill off.

Undoubtedly my internet book had some pics of Ren and Stimpy in there, as that was by far my favorite cartoon.  It was just the right amount of bizarre mixed with a healthy dose of hilarious.  That cat and Chihuahua aren’t alone in this Nickelodeon mini series though.  They’re joined by characters from Spongebob, Angry Beavers, Hey Arnold, Cat Dog, Ahhh Real Monsters, The Wild Thornberrys, Rugrats, and Rocko’s Modern Life.  These are sold blind boxed, but no matter which ones you get they’ll all take you back to a more simple time in your life when your biggest worry was keeping the tv schedule straight. 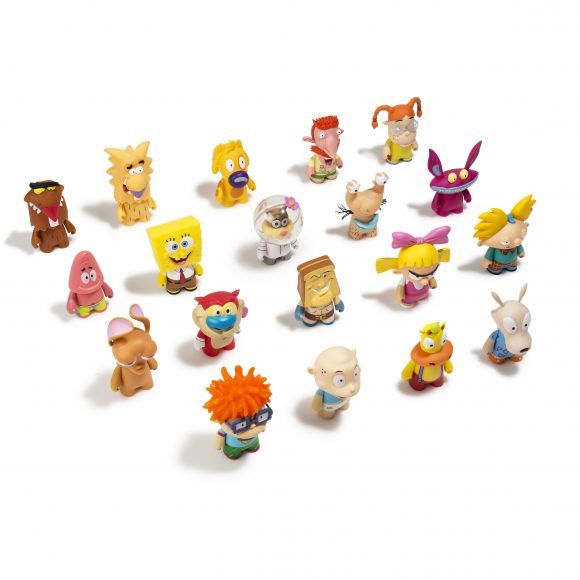 These modern twist on the classics are available right now from www.kidrobot.com.