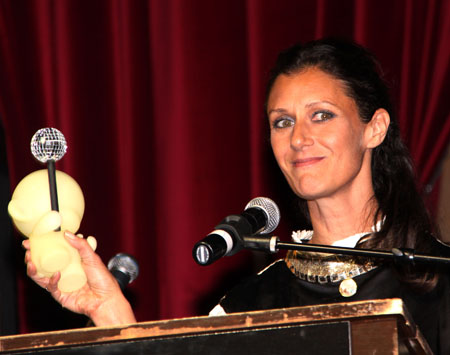 Paper Magazine, a New York City-based nightlife, culture, and arts magazine, holds an annual Nightlife Awards recognizing the best places in the country to get down and have fun. This year’s awards were held at M2 in the Chelsea neighborhood of New York City — Cassie and Harley and DJ Jon Battles supplied the tunes, Svedka supplied the booze, and Kidrobot supplied the awards statues! Also, there were trannies. Hey, it’s Chelsea.

We’ve supplied MUNNYs for the last few years’ awards and this year special, microphone-wielding, glow-in-the-dark MUNNYs were given away to winners. A good time was had by all.

Speaking of a good time, don’t forget to submit your nominations for Kidrobot’s highest honors, the 2009 Robos. Nominate your picks for this year’s most memorable in Toys, Apparel, Artists, Geek, and Culture. We’re taking your choices until December 18.