Brandt Peters, creator of Dead Bunny, sat down with the KRonikle to talk about the creative process, Carnies, and what inspires him. 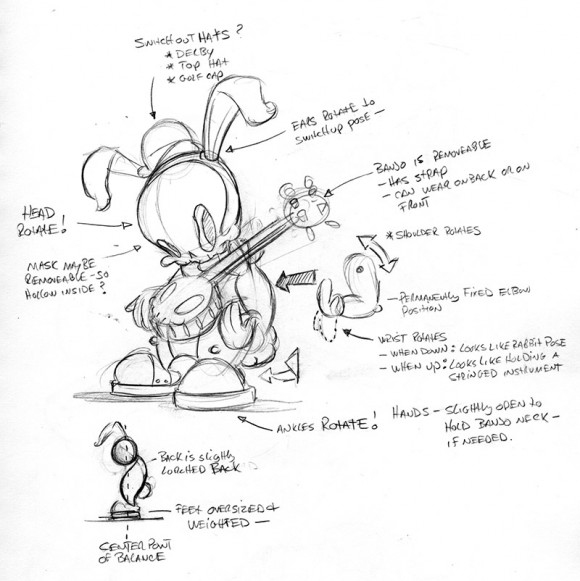 Kidrobot: What was the inspiration for the Dead Bunny toy?

Brandt Peters: There is never one inspiration for any of my designs, but I will try and narrow it down. I am completely absorbed by anything history related and particularly Vintage Americana, starting with objects and artifacts from the Victorian time to the Depression Era and even into the bright-eyed “the future is tomorrow” 1940s through 1960s. Somewhere smashed between times and cultures, closer to the turn of the century was a period where the “Unknown” was accepted, the fantastic was celebrated in fact marketed — and there was a battle between parts of the mind, the rational and belief in the unexplained. It was during this time that most of my favorite subjects came to be — Seances, Oracle telling, Ouji Boards and mythological artifacts and divinations of all sorts. None of these forms were new, but originally they were for the few.

This period was a game changer — marketing and communication for the masses and the unexplained got pulled and thrusted into the future along with everything else. One could find themselves purchasing an exotic communication device “to the other side” at your local toy store. Another perspective is: I love rabbit suits, skull banjos, memorials, carnivals and the “old timey” — it seemed like a natural fit to a brand new era in Western contemporary fairy tale culture, and even still — I just thought it would be cool! Dead Bunny: amazing, mysterious, powerful, “amaze and mystify your friends when you conjure Dead Bunny! Experience Dead Bunny Fun and Madness!”

Oh, before I forget — Dead Bunny never shows up alone. I think, I remember the story, something about The Carnies… 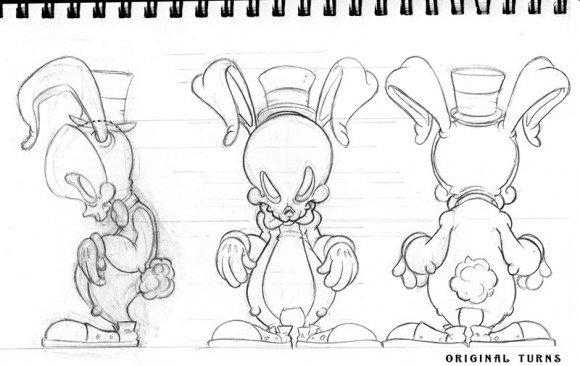 KR: The toy changed a lot from original turnarounds to the final product. What was the most challenging part of the process of bringing this toy to life?

BP: The most challenging part always is converting 2D flat design and turn-arounds into a dimensional object. The maddening difficulty is designing a “line form” — essentially a drawing (a tool) and have it convey life and motion, while at the same time be pose-able and have “play” to it, and all while still producing a drawing that would need to be enough for a sculptor or modeler to work from. In the beginning I opted to make my drawing/turns (front, side back, etc.) perfect, but in doing so, I lost what my original sketch had. I went back, I spent a great deal of time perfecting and recapturing the same motion and form my original design had but in turn form. What was funny is that still after we had captured the life perfectly in turns.

Other areas of the toy design became more difficult, such as placement of graphics and paint or hidden areas, parts behind parts and objects blocking views that would normally be more visible… Really the whole process is so back and forth, interpretations and re-interpretations, business and creative all in one. I believe that KR and I did well on this project. We’re both very proud and honestly, with my history in toys, it really was some of the most fun I had. It is not about what happens behind the scenes, it’s that you forget about the behind the scenes when you take in the experience — film, toy, book, business, anything. Just step up and bring your best, the rest of it works itself out! 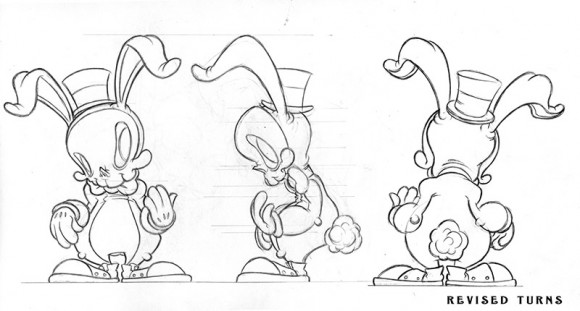 KR: Much of your work focuses around this “carnival of the macabre.” What/who are some of your biggest influences? -or- What do you find fascinating right now?

BP: My biggest influences. Uuhhmm. This is difficult to answer as it is always changing. The better model for this answer is that I absorb everything and reinterpret or process it into my own expression, which by the way is designed from all of my experiences; so nailing them down would not work as they shift and perspectives change, but currently I feel a connection from many fans and other artists to connect into the unknown and embrace it. Much of my work, toy designs and paintings reflects this idea — I find that really interesting! Many artists creating and tapping into something and none of us are really talking or sharing much, what are we all tapping into?

Brandt Peters’ Dead Bunny is on sale now at Kidrobot stores and kidrobot.com.